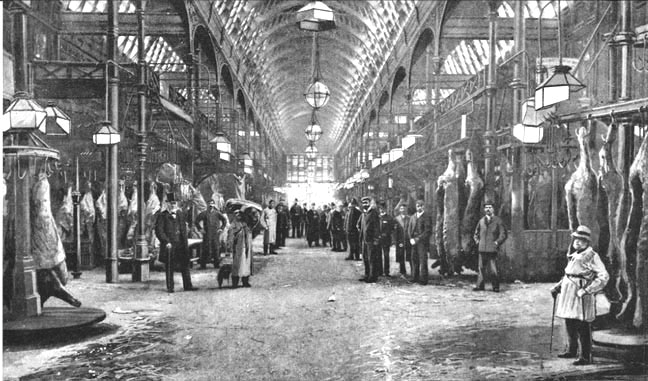 In 1174 the site was described by William Fitzstephen, clerk to Thomas à Becket, as ‘a smooth field where every Friday there is a celebrated rendezvous of fine horses to be sold, and in another quarter are placed vendibles of the peasant, swine with their deep flanks, and cows and oxen of immense bulk.’
It is thought that the name Smithfield came from a corruption of ‘smeth field’ Saxon for ‘Smoothfield’. The City of London gained market rights under a charter granted by Edward III in 1327.
When a grant of a market was made, either to an individual or a municipality, it was usual to allow the grantees the right of taking fixed tolls in view of the expenses necessarily involved in erecting, maintaining and supervising the market. In 1852 the Smithfield Market Removal Act was passed and the live cattle market was relocated to a new site at Copenhagen Fields in Islington.

In 1860 the City of London obtained an Act of Parliament (The Metropolitan Meat and Poultry Market Act of 1860), allowing the construction of new buildings on the Smithfield site. Work began in 1866 on the two main sections of the market, the East and West Buildings. These buildings were built above railway lines, which had newly connected London to every other part of the country, enabling meat to be delivered directly to the market.
The buildings, designed by City Architect Sir Horace Jones, were commissioned in 1866 and completed in November 1868 at a cost of £993,816. The Metropolitan Meat and Poultry Act also authorised the development of the Poultry Market, which opened in 1875. This building was subsequently destroyed by a major fire in 1958 and was replaced by the current building in 1962. Further buildings were added to the market in later years, the General Market in 1883 and the Annexe Market in 1888.
The original layout of the East and West Market buildings was 162 stalls, which were easily accessible to customers as they were open on most sides. Today, the refurbished buildings accommodate just 23 units in the East Building and 21 in the West which, rather than being of a uniform size, have been tailored where possible to the tenants requirements. Units are divided into a number of temperature controlled areas. Customers are able to walk along the central avenues choosing from the goods on display. If, however, they want to take a closer look inside the shop they must be dressed in clean protective clothing in order to comply with hygiene regulations

The banter and love of what we and all of our suppliers do is still evident every single day. Just ask the regular customers that come to visit all the suppliers.